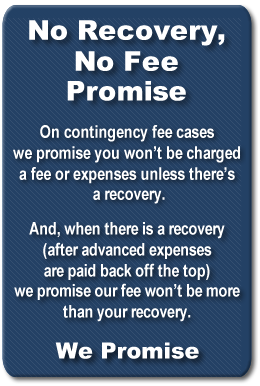 The cases listed here do not represent the law firm’s entire record. Of course, we are not successful in every case we handle. Each client’s case is unique and must be evaluated on its owns merits. The outcome of a particular case cannot be predicated upon a lawyer’s or a law firm’s past results. These matters, as with most cases, involve complex facts that require application to an increasingly complex set of State and Federal laws. These case results represent some of the matters where this law firm was successful in collecting the amounts stated for a client. These case summaries represent just some of the cases we have handled from 2005 when we opened this firm, through the present.

$450,000 settlement for a small business owner injured in a head-on collision auto accident.

$300,000 settlement for a teenager who was injured in an auto vehicle accident with two other friends.

$175,000 settlement in a medical negligence claim against a state mental health hospital.

$23,000 settlement for a client who sustained minor injuries as a result of a rear-end auto accident caused by a drunk driver.

$400,000 settlement for a former armed forces soldier who suffered a cervical spine injury as a result of a high speed rear-end auto accident. The settlement resulted in a recovery of $50,000 from the at-fault party and $350,00 from our client’s underinsured auto insurance policy.

$10,500 settlement for a mother and daughter injured in a side impact auto accident where the at fault driver admitted to being distracted by his mobile phone.

$53,000 settlement for a client involved in a head-on auto collision where the at fault driver was texting on a mobile phone and lost control of her car.

$41,639.75 settlement for a client attacked by a neighbor’s dog who suffered permanent scarring.

$275,000 settlement for a small business owner in a claim for insurance bad faith where insurer refused to pay for damage resulting from a petroleum spill on his property.

$185,000 arbitration award against our client’s insurance company after he was not given a reasonable offer on his under-insured motorists claim involving a serious car accident requiring him to undergo neck surgery and miss work for over seven months.

$135,000 arbitration award against our client’s insurance company after he was not given a reasonable offer on his under-insured motorists claim involving a serious car accident requiring him to undergo shoulder surgery and miss work for several months.

$100,000 settlement for a small business owner in an insurance bad faith lawsuit filed against his insurance company, after a claim was made against his business for damage to a customer’s property by his employees was denied for over two years.

$375,000 settlement for a nurse who sustained a neck fracture at work.

$420,726 settlement for an injured worker who had an electrical transformer fall on his back. Obtained approval for a hernia surgery for a State employee that was previously denied by the employer prior to the employee hiring our firm.

$63,500 settlement for a workers’ compensation client who was terminated from her job and had her claim denied before retaining our firm.

$138,000 settlement for a client who injured his back at work while moving a refrigerator. Obtained home modifications, attendant care and the purchase of a handicapped accessible vehicle for a State employee who suffered severe injuries from an explosion accident.

$210,000 settlement for an injured manufacturing employee after years of disputes with his employer, along with an additional five figure settlement to pay for future medical treatment. After a hearing at the North Carolina Industrial Commission, our firm won approval for our client’s back surgery along with attorney fees.

$254,000 settlement for a project manager who was injured after falling from a ladder.

$50,000 settlement for a dump truck driver who suffered a lower back injury due to an on the job accident.

$125,000 settlement for an operations technician with an electronics company who suffered a lower back injury while lifting a box on the job.